Hue citadel is famous as being one of the seven UNESCO World Heritage Sites of Vietnam. It is a popular stopping place among Hue’s attractions for tourists visiting to discover a hidden charm of Vietnam. 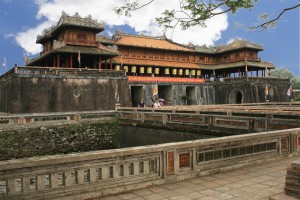 Hue citadel is located on the northern bank of the Perfume River, turning South with a total land area of 520 ha. The citadel architecture is a complex system. It represents and demonstrates the power of the Nguyen Dynasty’s centralism. Contained in this complex are the Hue Capital Citadel, imperial city and the Forbidden Citadel. They are symmetrical along the longitudinal axis and facing to the south.

Role of citadel in the history

The citadel plays an important role in the history of Viet Nam in general and Hue in particular. Hue people take pride in a long-lasting history. In 1802, Hue became Vietnam’s capital when the first King 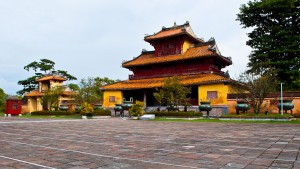 of the Nguyen dynasty, Emperor Gia Long chose this location for the imperial city. The city remained the national capital until 1945, when the last of the Nguyen emperors, Bao Dai abdicated and a communist government was established in Hanoi. In the Vietnam War, Hue’s central position was placed very near the border between North Vietnam and South Vietnam. Through the long precious history, Hue has integrated material and spiritual values. They have become its own unique special Culture.

What to visit at Hue citadel? 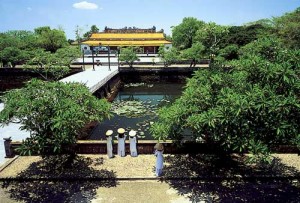 Hue citadel consists of more than 100 fascinating architectural works divided into numerous sections. The most prominent sections are Ngo Mon Gate and Thai Hoa Palace. Ngo Mon Gate is not just a gate, but overall it is an example of complex architecture. Its top is five phoenix floors, also a stage used to organize an annual celebration of the imperial.  If Ngo Mon Gate is like the face, Thai Hoa Palace is the heart of the citadel. It is the greatest and most beautiful.

Citadel, occupying the most prominent place because there is the dragon seat of the king, the symbol of feudal imperial power. Furthermore, this place is used for worship shrines of the Kings’ Nguyen: Trieu Mieu, Thai Mieu, Hung Mieu, The Mieu and Phung Tien Temples. There are a lot of other interesting feature such as the internal affairs office, the storehouse for precious objects, workshop for manufacturing.

Vehicles for getting there

Hue citadel lies in the centre of the city, on the northern bank of the Perfume River. Therefore, tourists can get there by bicycle, motorbike, private car as well boat. Come and admire the secrets of the historical architecture of the Citadel of Hue – a World Cultural Heritage.